WAY DOWN IN THE HOLE


"Way Down in the Hole" is the theme song of the HBO television series "The Wire." Each season has a different version of the song during the opening credits, but here is the songwriter himself, Tom Waits.

We just finished watching season four of The Wire, and I must say it's the best thing on television. By far. A show that covers the disintegration of an American city, Baltimore, may sound like a bore, but it somehow swoops into all the angles -- from the corner kids slinging dope, to the police detectives, to the community organizers, to the teacher in the crowded ghetto school, to the mayor. It's brilliant. 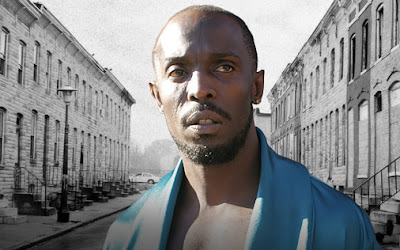 Omar, a killer who follows a code

That should be no surprise. The writing staff includes David Simon, who wrote "Homicide: A Year on the Killing Streets" (which inspired the TV show "Homicide"), and Ed Burns, a former Baltimore police detective and public school teacher. Frequent contributors include novelists Dennis Lehane ('Mystic River'), George Pelecanos ('Right as Rain') and Richard Price ('Lush Life,' 'Clockers', "The Wanderers"). They have created some of most complex and interesting characters ever to fill your TV screen. Put it in your Netflix queue. Go on.
Posted by Bob Rini at 6:48 PM

Labels: barksdale, THE WIRE, tom waits, way down in the hole

Jeez, I never know what I might find here. I too love The Wire. I download it off the net (live in Singapore so can't watch it on TV). There is so little on TV that is any good. With the Sopranos over I went searching. In addition to The Wire, I found Shield was and is excellent and am now trying out The Office as a wacky change of pace.

The Wire is a brilliant show, almost novel-like in it's complexity with all the interweaving stories from all classes of society. I'm totally hooked, and can't wait to watch the Fifth Season which has just aired on HBO. I'll watch it when it comes out on disc. Like the Sopranos, it makes you realize how good television can be (and how lousy much of it is). Cheers!