Say what you want about violence in Hip Hop -- those "gangstas" got nothing on the King of Western Swing, Spade Cooley. Spade was a big star, appearing in 38 Hollywood westerns, and had a string of top ten singles. But he was crazy as a bed bug, paranoid, and jealous of his young strawberry blond wife, Ella Mae. So much, in fact, that he literally stomped her to death after suspecting she was having an affair with another singing cowboy, Roy Rogers. 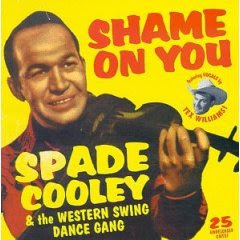 Born dirt poor, at the peak of his fame Cooley had amassed over fifteen million bucks capitalizing on the Western Swing craze. He owned a huge mansion on Ventura Boulevard in Los Angeles, a ranch in the Mojave Desert, and a 56-foot yacht for sailing the seas. They say his closets were lined with 100 custom cowboy suits, 50 hats and three dozen pairs of pointy-toed boots. But the vicious murder of his beautiful younger wife Ella Mae shocked the nation, and brought his kingdom crashing down.
Posted by Bob Rini at 10:55 AM