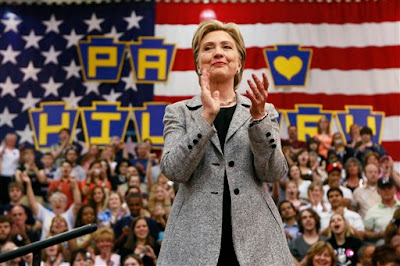 Hillary won the Pennsylvania primary. She will win, I should say, since C-Span was declaring her the winner a little while ago with only two percent of the vote in. When I switched on the TV around 6pm, the count was something like 52% to 48%. How can they make a safe prediction? Help me with the math.

There is a problem with calling an election too early. Remember the photograph of the victorious Truman displaying the newspaper declaring him the loser?

The Pennsylvania victory comes as no surprise to anyone. Hillary was expected to take the state, in spite of Obama reducing her double digit lead. Will the winning margin be sufficient to do her any good? She will pick up some delegates and stay in the race, but the nomination will still depend on the Super delegates, the American equivalent of the House of Lords, who may or may not reflect the popular vote. Perhaps our goal of promoting democracy should begin at home, and we should abolish this "corrective" to the will of the people.

On to the future. We can only hope the Democrats don't completely destroy one another before they fight the Republicans. Democrats have a knack for snatching defeat from the jaws of victory. 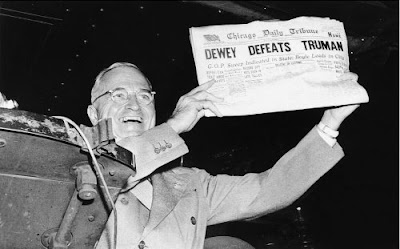 According to the Huffington Post, exit polls show Obama improved among whites and older voters, but Clinton won the late deciders. Two/thirds say Hillary unfairly attacked Obama, and that most expect Obama to be the nominee. Not surprisingly, Obama did well with educated and urban voters, and Clinton swept the bitter small towns.

Read the article by clicking here.
Posted by Bob Rini at 6:35 PM