THE LOW ROAD TO VICTORY 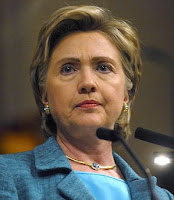 On the heels of her Pennsylvania victory, Hillary Clinton is getting slapped by a New York Times editorial -- a paper that endorsed her presidential bid earlier this year.

The editorial board says the New York senator's "negativity" is doing "harm to her, her opponent, her party and the 2008 election."

"The Pennsylvania campaign, which produced yet another inconclusive result on Tuesday, was even meaner, more vacuous, more desperate, and more filled with pandering than the mean, vacuous, desperate, pander-filled contests that preceded it."

To read the editorial, "The Low Road to Victory" from Wednesday's New York Times, click here.
Posted by Bob Rini at 10:06 PM