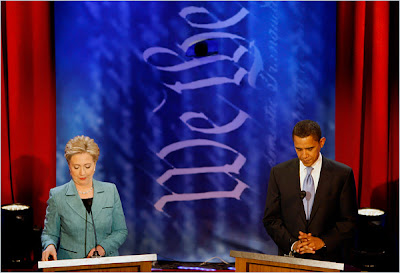 Barrack Obama found himself on the defensive in his debate with Hillary Clinton Wednesday night. She hammered away at his lack of experience, his patriotism, his lack of a flag lapel pin, his remarks about the bitterness of small town America, and his association with bomb-throwing 1960s radicals, the Weathermen.

For his part, Obama didn't get down and dirty. He defended himself, but didn't aggressively attack Hillary. He acted like an adult. It can be argued that this wasn't his strongest debate, but it's hard to tell how it played in the heartland.

For her part, Hillary pandered to gun nuts and churchgoers, something politicians have always done. If this is an example of the "change" she is promising, I'm not convinced. In both style and content, it sounds like more of the same.

Here is an interesting column from the Chicago Sun-Times about Hillary's use of polarizing politics.