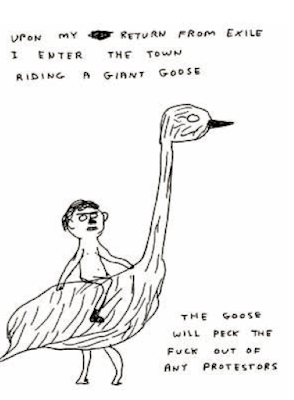 Dave Eggers, author and founder of the exeedlingly clever lit magazine McSweeney's, has curated an art show at apexart. Described in the Village Voice as "Text, image, and humor from the likes of R. Crumb, Leonard Cohen, Andy Warhol, Henry Darger." The show opened April 2nd, and has drawn the hipster cognoscenti in droves.

Crude art and hand-written captions are nothing new -- bathroom stalls have been full of it for years -- but this faux-naive art appears to be the rage. Art directors must love it, too, because it's everywhere from indie album covers to alternative weekly newsprint. The musical equivalent might be the soundtrack of Juno. All those simple, sickly drawn animals -- an awkward, gangly deer, for example, a few stick trees, and some too-cute, off-center children, maybe in snowsuits, maybe holding bows and arrows. It's supposed to look sweet and earnest, I suppose, and on another level ironic. Of course. 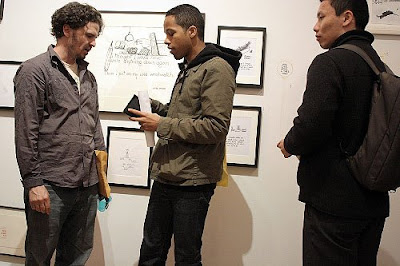 Eggers on the left (photos by Sam Horine)

Yes, it could be horrible, but much of Egger's charm resides in his Rolodex, and the list of participants is impressive. I mean, you wouldn't want childish drawings actually drawn by children, for godsakes. Like, duh. That's not ironic. We want people who know better.