AND YOU THOUGHT BARBIE WAS A BAD IDEA 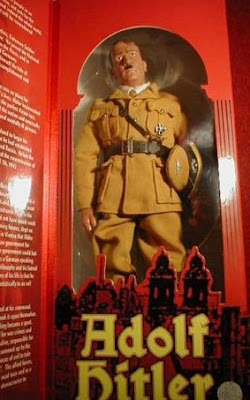 A Ukrainian toy manufacturer is marketing an Adolph Hitler doll in local toy stores. The controversial doll will go on sale this summer.

According to The Telegraph, "The 16 inch figurine -- complete with movable arms to reproduce Hitler's famous salute -- will first go on sale in the capital Kiev...The owner will be able to choose from a selection of outfits including 'early days Adolph' (brown shirts and jodhpurs) and 'wartime Adolph' (a grey, double-breasted tunic, black trousers, and Iron Cross medal)."

With reports of antisemitism and xenophobia on the rise, this may be a big seller this holiday season. In the Ukraine alone, over 1.5 million Jews were murdered by the Nazis and Ukrainian collaborators during the Holocaust. They won't be buying the Hitler doll, of course, and neither will holocaust survivors, who some say are overly sensitive. And neither will we. The Hitler doll will definitely NOT be on our Christmas list this year. 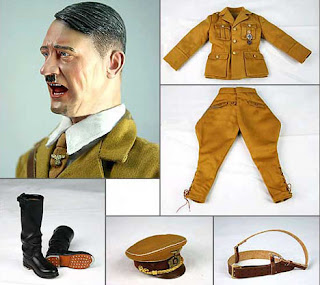 good.......I am a toys manufacturer supplier and looking for partners globally. If any one interest please contact me through this website.

The source information about Hitler dolls in Ukraine is based on false,
anti-Ukrainian propaganda. The Daily Mail have withdrawn the article from their website and the BBC have now publicly acknowledged that this story
was false: http://www.khpg.org/en/index.php?id=1210550372

This doll is manufactured in Taiwan and has been on sale in the UK and the USA for some time already:


There is detailed information about how this story came to be twisted
into a slander against Ukraine, one posted by the Kharkiv Human Rights
Protection Group (http://www.khpg.org/en/index.php?id=1209570049) and a more detailed analysis by the Ukrainian Archive
(http://www.ukar.ca/shevchenko/buzyna/hitler.html).

I urge you to please issue a public correction.

Prominent European media outlets recently circulated false reports of an Adolf Hitler doll being made in Ukraine. Ukrainian journalist Yevgeny Minko said he was disappointed with how the erroneous story was handled.

DW-WORLD.DE was among the European media sources to publish the falsified report on its English site in April 2008. It has since been removed from the Web site. The editors apologize to those readers who were offended by the publication of the article.
...
http://www.dw-world.de/dw/article/0,2144,3337110,00.html