LETTER FROM THE WHITE STRIPES

I'm gonna serve it to you
And that ain't what you want to hear,
But thats what Ill do
And the feeling coming from my bones
Says find a home

Here are the White Stripes playing "Seven Nation Army" live on the Grammys, with a great weird intro by Beck. I love this track. I know, it's so ten minutes ago, but I still like this a lot. The riff is killer, and the words are so strange, and if that isn't enough, Jack White switches songs mid-performance to play an electrifying cover of "Death Letter" by Son House. Is that good enough for you? Somebody say yeah! 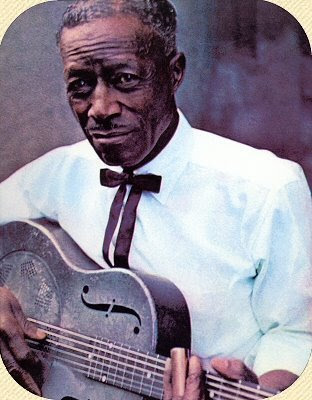 Eddie James "Son" House, Jr. - 1902-1988
Son House was an important Delta bluesman, and influenced Robert Johnson and Muddy Waters, and played alongside Charlie Patton. He spent hard time in Parchman Farm prison for killing a man in a juke joint who had gone on a shooting spree, wounding House in the leg. After prison, he recorded for Paramount Records, and for Alan Lomax and the Library of Congress. His music lives on.