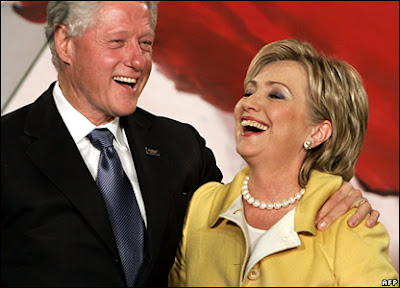 WASHINGTON (AP) — Sen. Hillary Rodham Clinton and former President Clinton made nearly $109 million since they left the White House, capitalizing on the world's interest in the former first couple and lucrative business ventures.

The Clintons reported $20.4 million in income for 2007 as they gave the public the most detailed look at their finances in eight years. Almost half the former first couple's money came from Bill Clinton's speeches.

"I have absolutely nothing against rich people," Hillary Clinton told North Dakota Democrats at their party convention Friday night in Grand Forks. "As a matter of fact, my husband — much to my surprise and his — has made a lot of money since he left the White House doing what he loves doing most, talking to people."

Clinton's tax returns show that of the remaining presidential candidates, she is the one most able to access large amounts of personal money. She lent her campaign $5 million in late February and could contribute more if she finds herself falling far behind Obama's proficient fundraising. -- from the Associated Press