I SHALL BE (UN)RELEASED 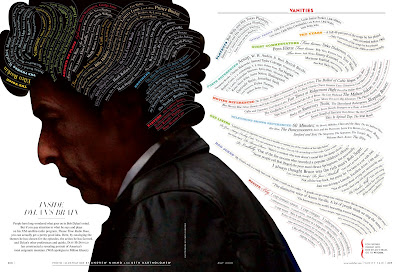 I shall be (un)released; some wonderful Dylan rarities from Uncle Bob's Vault:

John Brown from the unreleased Town Hall Concert, in 1963. This was supposed to be issued on the "Bob Dylan in Concert" record that was scrapped by the label. Too bad. A young folk Dylan mesmerizes the crowd with an acoustic guitar and his timeless storytelling. 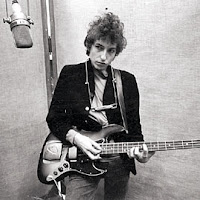 Like a Rolling Stone, take 6, from the unreleased Highway 61 sessions, 1965. This is just a couple takes away from the finished product, one of the greatest songs ever. Like the man said, this is "thin, wild mercury music." Electric Dylan. Shakespeare in the alley with pointed shoes and bells. 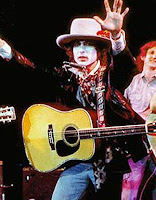 Simple Twist of Fate. Rarely performed, this unreleased gem is from the Rolling Thunder Review, a gypsy caravan that traveled the northeastern states in the autumn of 1975. He'd written this song not long before, but he's already rewritten it by now. As even casual fans know, you don't go to a Dylan show expecting it to sound like the records. Or even the same as the previous tour. He moves fast, like a thief.

"People have long wondered what goes on in Bob Dylan’s mind. But if you pay attention to what the recent Pulitzer Prize-winner says and plays on his XM satellite-radio program, Theme Time Radio Hour, you can actually get a pretty good idea. Here, by cataloging the themes has chosen for the episodes, the artists he has favored, and Dylan’s other preferences and quirks, Vanity Fair has constructed a revealing portrait of America’s most enigmatic musician."

Read the Vanity Fair article and find out by clicking HERE.
Posted by Bob Rini at 6:11 PM

as a design nerd, i especially appreciate the milton glaser homage and joke in that article.

Just last night I was viewing the 3 video series on the making of the Travelling Wilbury's album. Most of the songs were recorded in a small studio or even the kitchen at Dylan's mountain retreat above LA, apparently. What struck me was that, although Dylan is considered THE poet, the other artists (dylan, petty, lynne, harrison) were mostly in awe of Roy Orbison. Petty made the comment that he got Roy Orbison's autograph every day.

The vids are worth watching.

Roy Orbison was the man. Dylan said he was an opera singer, how he could hit those notes. I always thought he had so much sorrow in his life -- the tragic death of his family -- that it came through in his music. "Only the Lonely," for example, and "Crying." I think he was a rather plain looking fellow, kind of like a cheesecake with shades on, but if he'd been more handsome he could've been bigger than Elvis.
I have not seen the 3 video set, but I'd love to see it. That was sure a super group! For a long time the records and CDs were out of print, but then the box came out -- were the videos part of that box set? Thanks for the comments, Brian.
Carlos -- glad you noticed the Milton Glaser design -- believe it or not, that iconic image actually came as a poster in a Dylan album. I think it was the first greatest hits compilation, way back when. As Uncle Miltie would say, "Art is work." Get busy!

Bob, either get the link in my Traveling Wilburys post or go to Youtube and search traveling wilburys part 1...etc. You'll see them. BTW, the first and maybe the best version of I Shall Be Released was by Joan Baez...I think it was on the Joan album.

Thanks for the tip, Brian. I'll check it out! Yup, the Joan Baez version of "I Shall Be Released" is nice. I still love the spare version with Dylan and Happy Traum singing harmony on Greatest Hits, Vol. 2.

Sorry, I guess that got cut off. The website for World Gone Mad is: