LOVE deserves some respect. The group is roundly ignored by meat-headed classic rock stations, and sadly remains unknown to younger music fans. With the amazing Arthur Lee at the helm, Love first scored radio play in 1966 with the garage nugget "My Little Red Book," followed by their first real "hit" early the next year, "7 and 7 is," which hinted at things to come. In 1967 they emerged with strings, brass, and spanish guitars to deliver their masterpiece, "Forever Changes," a collection of shimmering baroque pop and psychedelic rock tunes that perfectly captured the spirit of the time like a butterfly in amber. 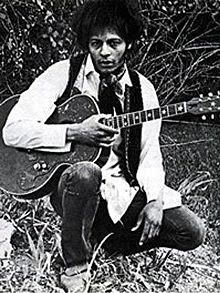 Love is acknowledged as a major influence on everyone from the Doors and Pink Floyd to Yo La Tengo, but nothing came easy for the band. Lee was fragile, both physically and mentally -- not the only qualities he shared with Syd Barret and Brian Wilson -- and terrified of flying, which held the group back from a wider success since they rarely left Los Angeles. I'm glad they ventured up the coast on at least one occasion, when I saw them perform in Portland. Shortly after the release of "Changes," the band fell apart.
In 1996, Arthur Lee was sent to prison for twelve years for illegal possession of a firearm. He served six years of his original sentence, and was released in 2001. Lee died of leukemia in 2006.

This film clip is from the "Forever Changes" anniversary tour in 2002.