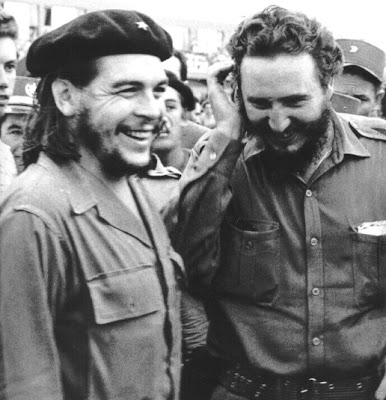 After surviving invasions, assassination attempts, and embargoes, old age has forced Fidel Castro to announce his retirement. For nearly fifty years, the tiny island ninety miles off the coast of Florida has remained a socialist country, ever since a small band of rebels led by Castro overthrew the US-supported dictator, Fulgencia Battista, on New Years Day, 1959. 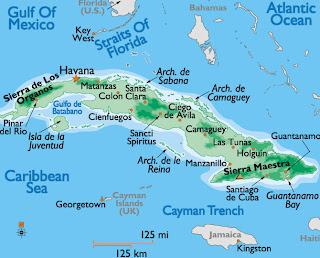 President Bush predictably called for "democracy," a word he doesn't seem to fully understand worldwide (since the US picks and chooses which dictators to support) and certainly doesn't understand in regard to Cuba, where the US controls Guantanamo military prison (see map); in "our" Cuba, prisoners wait years for secret "trials," experience torture at secret CIA "black sites," and systematically lose rights guaranteed by the Geneva Convention.

I'm just saying, if you live in a glass house...

Photograph: Castro and friend, Ernesto "Che" Guevara, who was killed by the Bolivian Rangers directed by the CIA in 1967.
Posted by Bob Rini at 7:21 AM