So tomorrow is Super Bowl Sunday. Get ready for the Pats/Giants game, with all the slow-mo instant replays of the thrill of victory and the agony of defeat -- sandwiched between extremely expensive beer commercials. Cool. And heart attacks; they seem to go up astronomically during the game, according to numerous news stories. Go easy on stress, and don't try those all-American scrimmages at home. Those guys are well-paid, highly-trained, steroid-enhanced, drug-filled professionals, and they're used to that kind of violence. Your wife is not -- or shouldn't be, anyway. Chill, dude. It's just a fricking game! 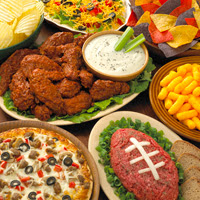 Perhaps unrelated to Super Coronaries, are Super Snacks. Owen, my research assistant, came across this statistic: If you took all the guacamole devoured on Super Bowl Sunday, and poured it on the football field it would be waist-high. That would certainly make the game more interesting, since it appears to be a Patriots blowout in the making. Actually, with all the computer enhancement, maybe they could simply reduce the patriots to three-quarter size, and have a fair fight. That would be cool. By the way, if you hate avocados, or think guacamole is too ethnic for your taste, any fried carbs will do, as long as you wash them down with sufficient quantities of beer. Here's a good sportsman's platter. 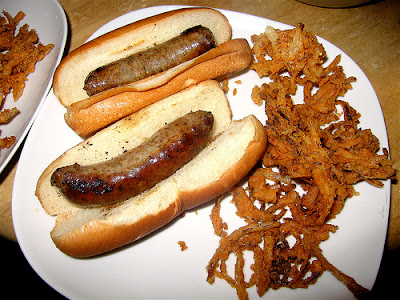 Of course, the commercials are where the money is. Corporations pay billions of dollars for spots on the Super Bowl broadcast, and unveil advertisements designed specifically for drunken sportsfans. Enjoy the game!
Posted by Bob Rini at 8:18 AM