"Ceremony" was written a couple weeks before Ian Curtis took his life in 1980, after which members of the band decided they could not continue as Joy Division -- so the song became the first single for New Order (backed by "In a Lonely Place"). This performance was recorded live at the Ukrainian National Home in New York City, in 1981. Mixing post-punk with electronic dance, which was to be their trajectory throughout the eighties, New Order had a string of solid hits. This was their first, but in a way it's really the last Joy Division song. 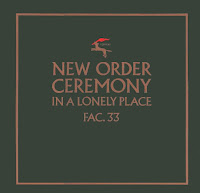 cool, this is one of my favourite songs, but i'd never heard this particular recording!

Isn't that a great performance? They say JD fans cried when these guys first unveiled it.