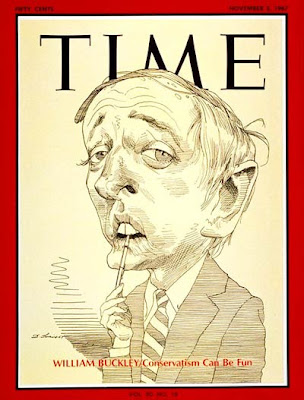 Patrician conservative William F. Buckley, Jr. is dead at 82. This illustration for Time by artist David Levine beautifully captures his air of superiority and bite-a-lemon sour-puss look of disdain. Still, he was an intellectual, and enjoyed a good tussle with the likes of Mailer or Chomsky. Compared to these greedy neo-con mouth-breathers, he often seemed like the last conservative with any intelligence or integrity left standing. (Imagine Bush debating Chomsky!)

A self-appointed guardian protecting America from the barbarians at the gate, Buckley will surprise no one with his dislike of singer/songwriter Bob Dylan. Here, he is quoted in the 9/6/85 issue of the National Review, a conservative magazine he founded and edited. He's referring to Dylan's performance on the LiveAid telecast.

"Fair enough. Bob Dylan comes on stage, and on either side of him are two famous guitarists from the Rolling Stones. Dylan last shaved, oh, three days before. (Why?) He is wearing blue jeans and a scruffy T-shirt arrangement of sorts. (Why? Trademark? Change trademarks?) The two guitarists arrive smoking cigarettes, which dangle from their lips for the first minute or so of the first song. (Why?) Their arms are entirely bare, and they otherwise wear what looks like a stripped-down dark-colored T-shirt. (Why? Heat?) Then intense concentration on Dylan, and neither I nor spouse can pick up a single word he sings, and we frankly doubt that anyone else could. (Why?) The songs were without discernible melody, the voice was whiny, with enough gravel in it to stop Jean-Claude Killy in mid-slope, the guitarists were hard to listen to (why? why? why?). But we were engaged in transcending history."
- William F. Buckley, Jr., 9/6/85

Goad us ever so slightly, and we'll rise to the bait. Here Dylan sings "Cold Irons Bound." If, like Buckley, you can't understand the lyrics, just click here.

The irony of this whole thing is that Dylan will outlive them all!!

Sounds like you're a fan. So I thought I'd introduce you to my new novel, BLOOD ON THE TRACKS, which I think you'd enjoy.

It's a murder-mystery. But not just any rock superstar is knocking on heaven's door. The murdered rock legend is none other than Bob Dorian, an enigmatic, obtuse, inscrutable, well, you get the picture...

Suspects? Tons of them. The only problem is they're all characters in Bob's songs.

You can get a copy on Amazon.com or go "behind the tracks" at www.bloodonthetracksnovel.com to learn more about the book.

Thanks, Thomas! I'm a big Dylan fan, and certainly enjoy a good read. I'll definitely check out your new novel.