ON THE SET OF DR . STRANGELOVE


These interviews of Peter Sellers and George C. Scott were conducted on the set of the Stanley Kubrick film "Dr Strangelove or: How I Learned to Stop Worrying and Love the Bomb." Of particular interest to me is Peter Sellers discussing the broad range of British accents. Great stuff! 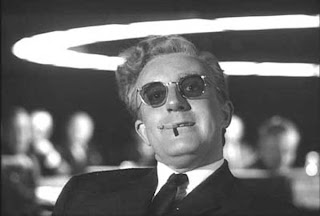 After all these years, Dr. Strangelove still holds up as a masterpiece of dark comedy and a savage satire of the military mindset. It's also prescient as hell, and many of the folks running the country today seem to be represented in it's scathing archetypes. Watch this movie and you'll never look at Cheney and Rummy the same way again!
Posted by Bob Rini at 8:45 AM