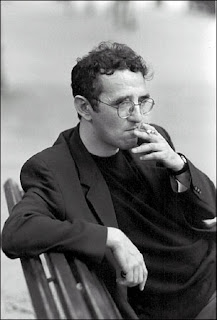 Maybe you know Roberto Bolano, but probably not. Even if you pay attention to such things, an experimental author who writes in Spanish might be easy to miss, even when he is lauded worldwide as a big deal. I mean, it's not like he's Brittney Spears or an American Idol, after all -- you know, really important. He's a writer, for godsakes! And he doesn't even have the courtesy to write in English, so how good could he be?
For a while he's been traded among the cognoscenti as a secret commodity, a contraband item, something to turn someone on to, an antidote to jaded tastes. Now he's finally getting his well-deserved due in the English-speaking world after important critical essays in the New York Review of Books ("The Great Bolano," July 19, 07) and the New York Times ("The Visceral Realist," April 15th, 07).
Bolano died on 2003, at the age of fifty. A Chilean novelist and poet, he traveled Latin America on his own version of "The Motorcycle Diaries," the trip that radicalized Che Guevara, and befriended revolutionary poet, Roque Dalton, in El Salvador. Bolano returned to help the elected socialist Allende in his native Chile, but in 1973, in a US-orchestrated coup, the dictator Pinochet took power, and Bolano was jailed. He was rescued by a couple classmates who had become prison guards, and escaped the country. 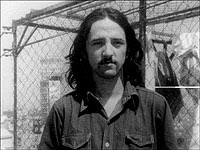 A descendant of brilliant fabulist Jorge Luis Borges, but highly unique, Bolano has written several books now in translation, including the novella "Night in Chile," and "Distant Star." His latest novel to be translated into English is "The Savage Detectives." It tells the tale of two desperately poor poet travelers, members of the secret philosophy movement "The Visceral Realists." Philosophical, whimsical yet political, Bolano is a new animal, a rara avis in letters, something special to seek out if you venture beyond the Comfort Zone.
There is talk of another book, the massive "2666" published in 2004 (in Spanish), a novel that is divided in five "parts," four and a half of which were finished before Bolaño's death. Centered around the unsolved (and ongoing) serial killings in Ciudad Juarez on the Mexican border, the book features a wide cast of characters in it's 1100 pages, including the secretive, Pynchon-like German writer Archimboldi. That should be interesting.
Posted by Bob Rini at 6:15 AM

This book sounds very interesting. I plan to read it when I'm finished with my studies.

Here's another article I found after my initial post. The guy is red hot.