My friend Tommy turned me on to this clip of Georgie Fame and the Blue Flames performing on Ready, Steady, Go! It's a cool performance from the mod British pop singer, another great one from an amazing year, 1965.

As music goes, 1965 is hard to beat. The Byrds had a huge hit with Dylan's "Mr. Tambourine Man," and Dylan came out with "Like a Rolling Stone," perhaps the greatest single of all time. In a year of classics, The Rolling Stones couldn't get no "Satisfaction," the Who sang about "My Generation", and The Animals screamed "We Gotta Get Out of This Place." The Beatles, still riding a wave of hits since they'd shown up in America the year before, gave us "Help!", "Ticket to Ride," "Day Tripper," and the brilliant Rubber Soul album that marked a new level of sophistication and introspection in pop music, and showcased such classics as "Norwegian Wood," "In My Life," and "Nowhere Man."

There were so many good songs that year, it's hard to keep track. The Temptations sang "My Girl," the Supremes urged us to "Stop! In the Name of Love," and the Four Tops sang "I Can't Help Myself." James Brown came out with "I Got You (I Feel Good)" and "Papa's Got a Brand New Bag." Sam Cooke released "A Change is Gonna Come." Nina Simone played "I Put a Spell on You," and Otis Redding released "Otis Blue." The Kinks released The Kink Kontroversy, Sam the Sham danced with the "Wooly Bully," The Righteous Brothers lamented "You've Lost That Loving Feeling," and the Beach Boys rhapsodized about all those wonderful "California Girls." 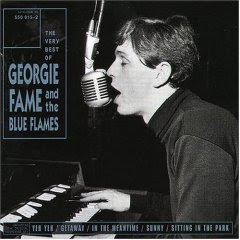 I could go on. There were plenty more. There was so much great music that many tracks that would normally have been huge in a regular year got plowed under by the wave. Here's a clip you might have forgotten, with Georgie Fame and the Blue Flames. A great clip from a great year, 1965.
Posted by Bob Rini at 7:39 AM

Thanks for the walk, walks actually over several posts, down memory lane. Living in the SF Bay Area, I got to see many of the groups that made it in the 60's.

You're lucky! The San Francisco Bay Area was a great place to be in the sixties -- plenty of great musical groups.