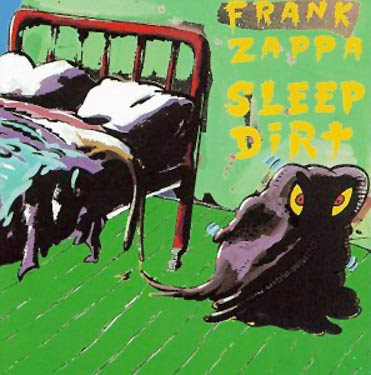 Gary Panter is great. Blowing out of Oklahoma like a doomsday twister, this guy knocked down barns and silos and blew up big in the LA punk hardcore scene, in the magazine Slash, and later RAW, contributing an often-imitated raw punk aesthetic to an anesthetic world of design. He later became head designer for the cool and weird Pee Wee's Playhouse. I like Jimbo, his post-apocalyptic comic about a man surviving in the future in a poisoned wasteland of cultural detritus. You know, like all of us. 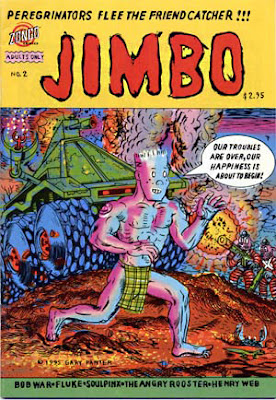 "I was crazy about dinosaurs and art and robots and forced to read the Bible, in childhood. I didn't really read until the 4th grade. I sat in the car and taught myself to read on the OZ books of Baum. Read Swift, Poe and Twain. At 12 I decided it was time to read an adult book and so I checked out Fowles -- The Magus, because it had a minotaur on the cover and I was into Picasso heavily by then. In college read everything by Phil Dick, J.G. Ballard, William Burroughs, Anthony Burgess, Gravity's Rainbow by Pynchon and not much else."
-- Gary Panter, from an interview at Reader's Voice 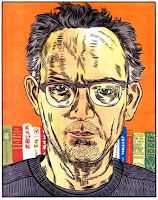