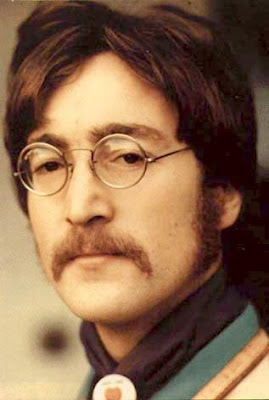 27 years ago, on December 8th, 1980, John Lennon was shot and killed. Maybe you remember hearing the news. I was painting a big blue canvas when a cousin called, telling me that Howard Cosell had interrupted the football game to say John Lennon was shot. Shot and killed? Yeah. I called friends. I called the local rock radio station for confirmation. I spoke with a distraught rock deejay. "Play the Beatles' Christmas messages," I told him. "That would be a great way to remember John." Every year, the Beatles sent out a flexy disc of holiday greetings and horseplay to their fan club, and I happened to have a copy. The deejay did not. 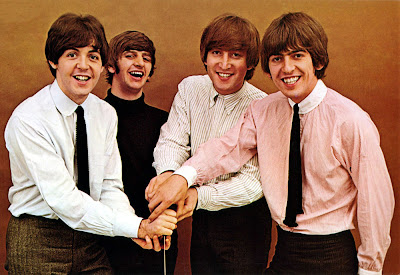 My sister Bekki and I raced to the radio station in Southeast Portland, and the deejay dubbed the Beatle messages on a big reel-to-reel tape recorder. We sat quietly in the sound-proof room and listened to the joyous voices of the Beatles going out over the airwaves.
On the way home, we stumbled upon a candlelight vigil in the city park blocks. Broadsided with the terrible news, people had come out to light candles, play guitars, and sing Beatle songs. If you were a fan, in real time, you understand their great sense of loss. If not, you probably wonder what the fuss was all about. After all, people die everyday, right?

To help explain, here's a good article from the huffington post
http://www.huffingtonpost.com/martin-lewis/salute-to-john-lennon_b_75923.html

To hear an actual Beatles Christmas message from 1967, please click the red button.