The Jam exploded in the first wave of punk in 1977. They were angry but also very clever, and when they took on the British class system and the conformity of their peers they did so with a particular éclat. They were punk, for sure, but also Mod revivalists and snappy dressers. With tight guitars, and brilliant lyrics by singer Paul Weller, they held their own against the angry young men of their day, namely the Clash, the Sex Pistols, and the Buzzcocks. In spite of their considerable talent, and some underground hits in England, they barely got noticed in the states. It's a shame.

Check out this live clip from back in the day, "Eaton Rifles." The song was inspired by an unemployed demonstrators 'Right to Work' march being heckled by what Weller described as "a bunch of tossers" from the prestigious Eaton College.

Thought you were smart when you took them on,
But you didn't take a peep in their artillery room,
All that rugby puts hairs on your chest,
What chance have you got against a tie and a crest.

Thought you were clever when you lit the fuse,
Tore down the house of commons in your brand new shoes,
Compose a revolutionary symphony,
Then went to bed with a charming young thing. 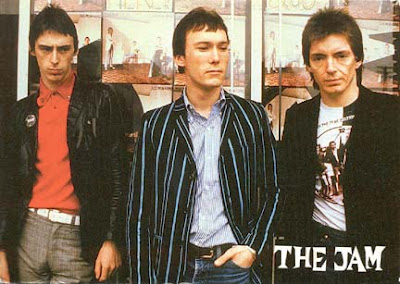