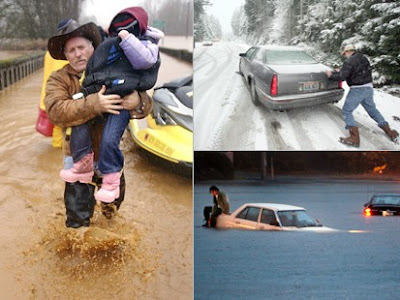 We've had a hell of a storm here in the Pacific Northwest -- with plenty of wind and mudslides, floods and record rainfall. About an hour ago the Oregon Air National Guard evacuated Vernonia, a small timber town between Portland and the coast. A 700 year old giant Sitka spruce -- the world's largest Sitka -- went down in high winds in Klootchy Creek County Park. The Chehalis river swallowed homes. A mudslide swallowed a car at Golden Gardens. People were stranded, airlifted, and some even died. The governors of Washington and Oregon both declared states of emergency. It's been raining heavily since Saturday, when it snowed about two inches on my lawn, and it's still blowing.

Between this storm, and Bush's press conference this morning, the song that comes to mind is Bob Dylan's "Idiot Wind." I present it here in two forms. The first is an outtake from the New York studio sessions, one of the songs he finally released in 1975 on the classic album "Blood on the Tracks." Thoughtfully performed, this version nakedly reflects the turmoil of Dylan's life at a time he was breaking up with wife Sara. Too naked, perhaps, because he eventually changed the words and revamped the music in Minnesota with some other musicians, and released the latter version.


The second "Idiot Wind" is another storm entirely. Recorded live in 1976 at Fort Collins, Colorado, at the tail end of the Rolling Thunder Revue, this version rages like King Lear's "cataracts and hurricanoes." This was the last song on the last day of the tour, it's an outside gig, and it's raining hard. Dylan and Co are exhausted. They look like ramshackle gypsies in need of a bed. Nobody is getting along by this time. The sound is rough, unpolished, and the show is being filmed for broadcast on NBC. A final surprise, Sara shows up with kids in tow. Is it rage, or sorrow, or some mad force of nature that drives Dylan to one of his greatest live performances? Absolutely brilliant.