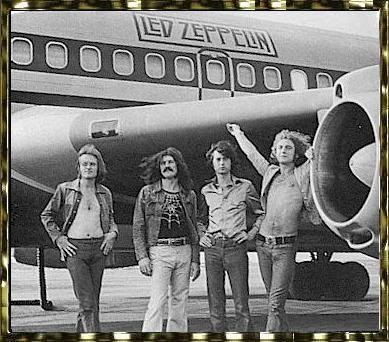 Yes, the mighty Led Zeppelin is touring again, and here at the Nine Pound Hammer we're paying tribute to the Hammer of the Gods. We salute the band that launched a thousand other bands, all worse than the original. The first two albums were classics, no question. And there were other great songs in the later lumbering years of wretched excess. Besides, nobody could throw a TV out of a hotel window quite like Led Zeppelin. With that in mind, here are the early Beatles performing a Zeppelin classic, "Stairway to Heaven." Just kidding. This is actually a band out of Australia doing an hilarious spoof of the Fab Four covering Led Zep. This is heavy, dude.

And remember. If there's a bustle in your hedgerow don't be alarmed now. Whatever that means.

Thanks to Scott for sending this in.
Posted by Bob Rini at 5:50 PM