THERE AND BACK AGAIN 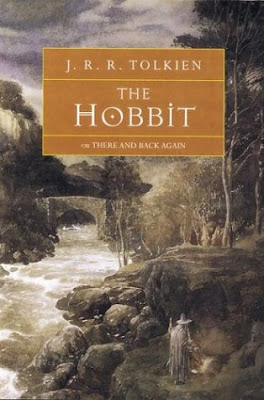 Good news from Middle Earth. Peter Jackson just announced he will be making "The Hobbit." Following years of dispute with New Line, Jackson is finally amassing his creative armies to produce the J. R. R. Tolkien classic as two movies: the first dealing with the contents of the eighty year old book, and the second, imagined entirely by Jackson and creative partner Fran Walsh, linking the Hobbit to the beginning of "The Lords of the Rings." Given his current obligations to direct "The Lovely Bones," and a feature length adaptation of the French comic series "Tin Tin," fans of Tolkien and LOTR will have to be patient. According to the Hollywood Insider, "Jackson will develop the properties over the next year with hopes of entering into pre-production by 2009 for a 2010 and 2011 release."
Posted by Bob Rini at 6:38 AM

Noah is swooning over the Tin Tin news. :)

He hasn't seen the Lord of the Rings movies yet, he's been working his way through the books as he waits for age to desensitize him to the creepiness.

Yes, the Orcs in the Lord of the rings can get pretty vicious, that's for sure. Especially when you get a few hundred thousand marching out of Mordor. Yow! That creeps me out a little myself!