INSIDE THE OLDE TOYMAKER'S SHOPPE 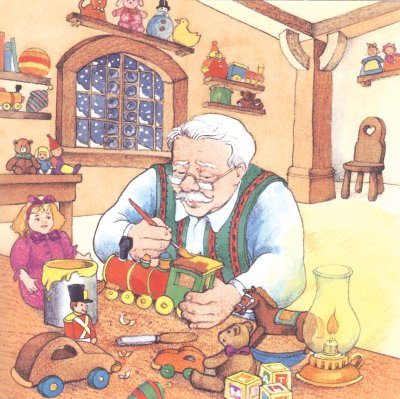 This time of year, you're probably buying toys. Toys for kids -- I don't mean collectible action figures, or cool art objects -- I mean actual toys for kids. The ones made by Santa and the elves at the North Pole. It turns out Santa doesn't make them anymore. In fact, he's been outsourcing them for years, but you probably know that. Still, I bet you picture some kindly, gray-haired old Geppetto hammering away in his toy shop, or looking over his spectacles and dabbing on the final details with a Winsor and Newton Series 7 Kolinsky Sable paintbrush. 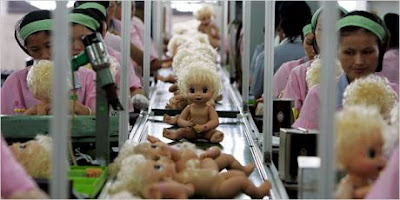 Wrong! It turns out your typical toymaker doesn't have kindly spectacles and gray whiskers. Your typical toymaker isn't old enough to have whiskers. And she's a female. Instead of Geppetto, she's named Liu Siuling, and came from the Anhui province, and traveled from the Chinese hinterlands to the big city when she was barely fifteen. She had been making 100 yuan a month ($12.10) in a restaurant, but now she works in a massive toy factory in Biejing. Since 75% of the worlds toys are made in China, including many, many American brand names, chances are that toy on the shelf was made by someone like Siuling. 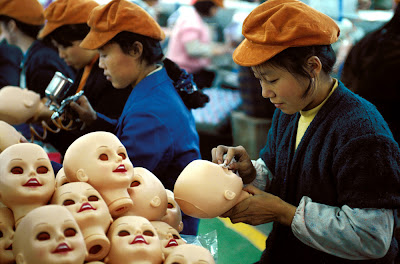 After twenty years of working in Beijing, Siuling still must pay an annual fee for her temporary residence permit (like all migrants within China) which effectively registers her as a second-class citizen in her own country. This designation denies her a right to vote in local elections, and to have her children go to school, and opens her to hassles from local cops who are strapped for cash. The story is typical. There are factories all around Beijing, filled with similar country girls and poor men, and children. In the larger factories, 20,000, 30,000, even 70,000 people work. 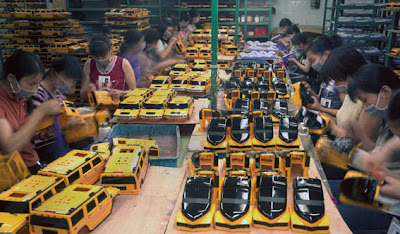 You're bumming me out, dude. First there's no Santa and now this. Okay. I won't even mention the prison toy factories, which might really harsh your mellow. But it's not all bad. Thanks to the efforts of the All China Federation of Trade Unions (ACFTU) after seven years of working in Guangzhou, the capital of the southeastern province of Guangdong, migrant workers can finally apply for permanent residence and the social entitlements that go with it. Migrant workers form the country's main industrial workforce, and there are an estimated 20 million of them presently in Guangdong alone. The effort to get some basic rights is going on nationwide. 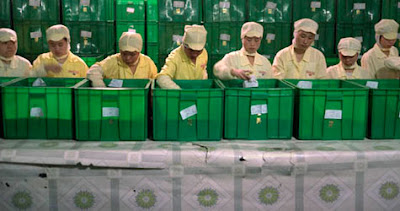 Sorry for hectoring you, but next time you're out Christmas shopping and navigating those miles of aisles in a mega-mall, think of where all that merchandise comes from. Check the labels. Remember it's not just China, but any factory and workfarm worldwide where hungry people are a source of cheap labor. Instead of giving all that plastic crap try giving homemade things this year (I know, I know, the kids are screaming for brand name junk). Here's an idea. Try making something, like artwork or a toy, or give an "experience" like tickets to a play or the zoo or a ballgame. Why not give a plain old box of paints and some paper? With any luck, you could turn your own house into Geppetto's workshop. 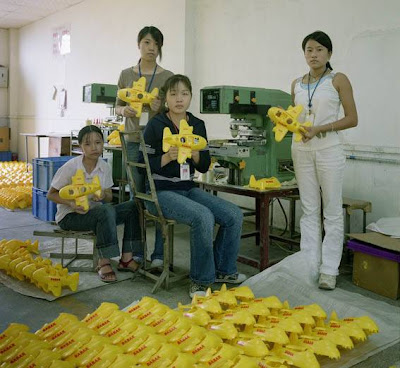 http://frostfirecube.com/chinese-prison-is-a-toy-factory
Posted by Bob Rini at 6:58 AM