I love this strange trailer for Takashi Murakami's animated film, Kaikai & Kiki. I can't wait to see the movie. After conquering the art world and hipsters alike with his trademark superflat style, Murakami is now the flavor of the month with hip hop stars like Jay-Z, who recently commissioned artwork, and Kanye West, whose latest album, Graduation, sports a cover illustration by Murakami. I have a tiny cartoon he drew for me during the install of the Superflat show at the Henry Art Gallery. It may contribute to my retirement fund someday. 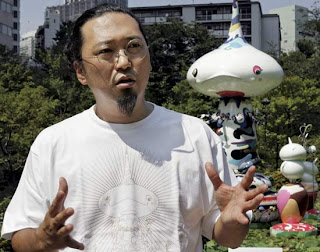